A group of pupils were trained as peer mentors (Buddies) in 2018. The Buddies are fantastic role models to other pupils within the school and have made a difference to the school environment. There are two Head Buddies and they also have a rota where a small group is ‘on duty’ each day.

The Buddies describe their role as helping other children and playing with them, alongside ensuring the playground is kept tidy and welcoming. One Buddy described their role as “other children can relate to us” and “Buddying means children always have someone their age they can talk to”.

When the Buddies were asked about their role, they said it had been “a good experience” and that “the training was even having an impact at home through helping out more”. They said “Buddying encouraged all pupils to respect each other and their environment”.

Every year a new cohort of Year 5 Buddies are interviewed by the existing Buddies and the lead staff member, and are then recruited and trained. 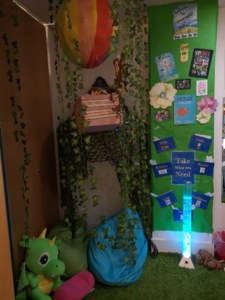 Ashford Oaks has developed three indoor safe spaces and one outdoor space (supported by a Pay It Forward application). The three indoor spaces are staff offices which are very welcoming and calming for the pupils to use, they know they are spaces they can go to and “just be” with a staff member there. The outdoor space is a gazebo for pupils to use and is monitored by the Buddies. The pupils describe the indoor spaces as “a space where you can sit down and feel really comfortable inside” and “it’s a stress-relief space”. They said “it gives us another space to go”. Staff say “the children really value the space” and they have recently introduced theming the space, such as a jungle theme.

Ashford Oaks have successfully applied for not one but five Pay It Forward grants, all led by pupils. These projects support the wellbeing of others by paying the kindness forward. This includes the Safe Space which has been developed, as well as:

A community fridge for families to use (regardless of circumstances) filled with donated food from local organisations. This has worked very well and parents have fed-back that they have confidence that they’re not being judged when they use the fridge. The fridge has influenced wider schemes such as local businesses donating towels, bedding and hygiene products to families who need it.

A Table Tennis Club including table tennis equipment for the Buddies to facilitate games. This is popular in the winter months especially.

A Transition Project where pupils at Ashford Oaks attended transition events with other primary schools. The grant funded t-shirts which every pupil could wear to ensure the pupils from all primary schools wore the same thing. Staff said the children got a lot out of the transition event at various workshops and made friends with children from other schools so feel “more confident” for starting secondary school in September.

Project Purple event, in which the Pay It Forward grant funded the continued community work taking place on a local field to clean the space and make it usable for pupils, families and the wider community. Pupils said

Pupils described how the space before was just for car parking and an empty space and now it is somewhere where children can play and adults can use too.

Overall, Ashford Oaks has worked incredibly hard to develop their whole school approach to resilience and wellbeing. They have fantastic safe spaces and have really valued the introduction of trained Buddies in school. Ashford Oaks has been a very proactive school in terms of applying for Pay It Forward funding, organising training for the Buddies and working through the Resilience Toolkit. They have implemented schemes which support not just the pupils’ wellbeing but the staff, families and wider local community wellbeing as well.

Ashford Oaks were awarded the Kent School Award for Resilience and Emotional Wellbeing in November 2019.