Using student voice and feedback was crucial to Oaks Primary Academy in developing their peer mentoring offer within the school.

The school previously had a system in place called ‘playpals’ for some of the younger children, but felt that introducing a peer mentoring scheme for all children would also be very beneficial. Year 5 students were chosen to become trained as peer mentors using the free peer mentoring toolkit. It was decided that all Year 5 students would be trained, and then they could apply and be interviewed for the role.

During the training, students were given the opportunity to design their own badges and voted for their favourite design. The winning design was finalised electronically in a variety of colours to suit all; it was very important to the students to be diverse and allow all students their own choice. 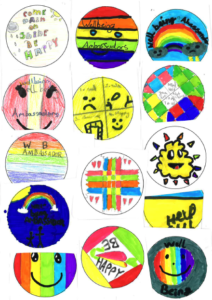 Following on from the training, those who were keen to undertake the role completed an application, were given an interview and formally offered the role.

Peer mentors also voted regarding their name and are now called ‘Wellbeing Ambassadors’. Students have been consulted regarding all aspects of the role including how they would like to see the role develop as part of the Pupil Employment Scheme.

Wellbeing Ambassadors are put on timetables to be on duty during break and lunch times to support anxious students. They also regularly present whole school assemblies on wellbeing, including their new safe space ‘Zen Zones’, to deliver wellbeing messages to all children within the school.

There are plans in place to introduce ‘Worry Wells’ to help support those less confident students. Wellbeing Ambassadors were also instrumental in supporting the ‘Zen Zones’ to be created in every classroom, and help maintain this.